How to Choose a Condensing Boiler

Who hasn’t asked themselves this question when replacing their boiler: “Should I install a low-temperature boiler or a condensing boiler? It seems helpful to recall fundamental technical points to answer this question calmly.

Even if the manufacturers have tried to give the two types of heaters the same external appearance in terms of dimensions or aesthetics, these two heater types have entirely different designs. It is sufficient to open the front cover of a low-temperature heater and compare it with a condensing heater, as both heaters are produced under the same brand name and, therefore, by the same manufacturer.

For the sake of simplicity, we will discuss only wall-mounted boilers here.

The primary heat exchanger or heating body is made of copper covered with aluminium and silicon-based alloy and is very resistant to the high temperature of the flue gases. However, it is susceptible to the acidity of the condensate. It comprises one or two layers of copper tube to which fins are attached – this is known as a shell-and-tube exchanger.

The gas valve or gas block brings the fuel to the rail under the gas pressure supplied to the meter.

The burner is atmospheric and consists of a series of nozzles comprising several groups of orifices fed by a feeder consisting of a set of injectors.

The temperature of the flue gases must not fall below 55°C. The dew point of natural gas is between 50 and 55°C depending on the excess air: the higher the excess air, the lower the condensation temperature. Below 50°C, the water vapour in the flue gas is transformed into acidic condensates that attack the copper primary of the boiler and pierce it. It is, therefore, necessary to maintain a low-temperature boiler at a particular power level so as not to lower the temperature of the flue gases too much. In concrete terms, a low-temperature boiler should work with a water flow in the radiators, not below 55°C, and even for safety reasons, it is preferable to keep the flow at least at 60°C.

You should note that the boilers had a hot water flow to the radiators of 90°C. Then, with the improvement of techniques, the hot water flow went down to 80 and then to 70°C. It is currently 60°C. This is why these boilers are called “low temperature”. The lower the boiler feeds the water temperature, the higher the efficiency, as less gas is consumed to produce the same heat.

The condensing or low-temperature boiler 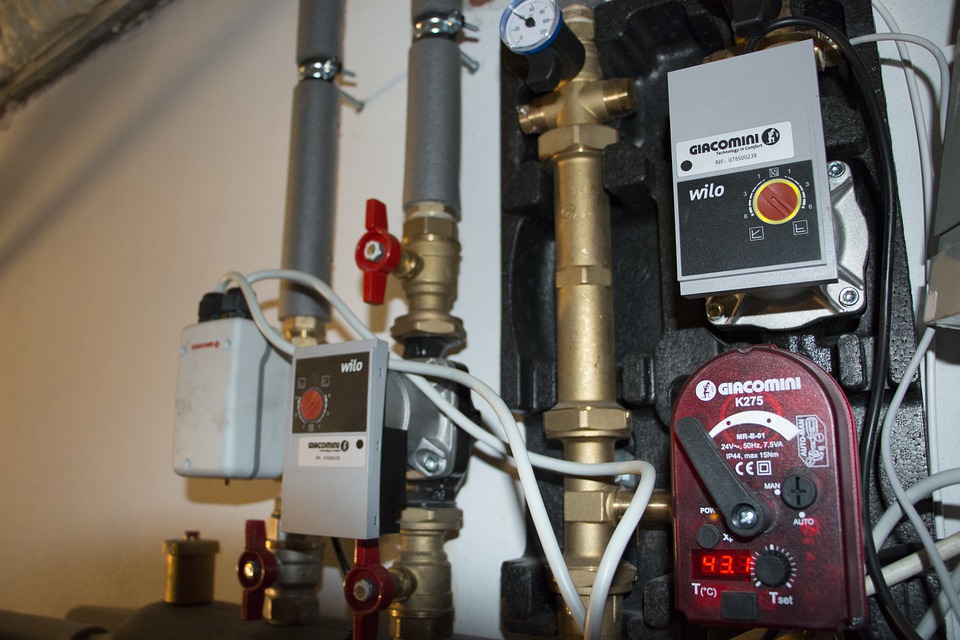 The primary exchanger is a 316 L or 904 L stainless steel condenser. It comprises two stages separated by a deflector which ensures the condensation of the fumes, i.e. their passage from a gaseous state to a liquid form. The primary heat exchanger is oversized and made so that it is insensitive to acid attacks by condensates. Some manufacturers use cast aluminium exchangers (Aluminium + Silicon), which are less expensive than stainless steel.

The gas valve is called a forced-air valve; it is controlled by a fan that brings the mixture of combustion air and fuel gas to the burner by mechanical suction.

The burner is a surface or cylindrical burner with total pre-mixing; the resulting flame is blue and short.

The boiler can work at shallow temperatures and send water to the radiators at 30 or 35 °C. The flue gas temperature falls well below 55°C thanks to the excellent design of the primary or heating body. The dew point is reached, and there is, therefore, the formation of acid condensates that are evacuated in a condensate box integrated with the boiler.

Please note! It is essential to understand that the lower the temperature of the hot water flowing through the radiators, the larger the radiators’ surface area must be to maintain their initial heating power. Indeed, the rooms in the house have not been reduced following the replacement of the heater, and even if the insulation has improved, it is still necessary to provide high power to old houses. Otherwise, the strength of the radiators will decrease to such an extent that it will be impossible to heat the home properly. The manufacturers are aware of this problem, and to avoid encountering the same difficulties that led them to abandon condensing in the 1980s, they have designed a burner and integrated a calculator into their heater that will allow the condensing heater to operate with high hot water flows of 60, 70 or even 80°C. However, as the temperature rises, the condensing heater will no longer condense or will condense very little, and the efficiency will approach that of a low-temperature heater. A customer who has invested more money in a technology that is initially very efficient (that of condensing) will have the impression, as will an installer, that the boiler is working correctly.

Where is the problem, then?

It works with output close to that of a low-temperature boiler. The economic operating cost announced at the outset is not achieved because the installation is not adapted, despite the working boiler. Still, it does not condense for the price, and with condensing technology, we end up with improved low-temperature technology. This nuance raises the question of whether or not a condensing heater is justified, but once it is connected to the system, it is much more expensive than expected!